The story itself needs no introduction. 3 years ago Leicester were 20th place in the league and were lucky to survive in the top flight of English Football. They won seven of their last nine games to survive; miraculous in itself. In the last two years, Manchester United have spent more on players than in Leicester’s entire 132 year history.
Claudio himself was sacked by Chelsea when Billionaire owner Abramovich came in and wanted trophies 13 years ago. He wasn’t deemed good enough to win trophies with one of the biggest clubs and was replaced with Jose Mourinho. More recently he was sacked after a terrible four months with Greece before his signing was mocked at the start of the season.
This as the backdrop for a season at a club simply grateful to exist in the Premier League. I want to drill down into the messages Claudio Ranieri has been delivering to the media throughout the season, and how he has used Sports Psychology to perform the 5000-1 miracle.
Coaches must think about everything they do or don’t, and the message it sends. The motivational environment created for their players is critically important (example: Jose Mourinho’s latest work at Chelsea). I believe the intended audience of Ranieri’s press statements wasn’t the media or millions reading the papers the next day, but his closely knit squad of players. He needed to fill them with belief to perform the impossible.
It is an excellent study in what Sport Psychology calls the ‘mastery focus.’
Mastery focus is on the task itself. Alternatively an outcome focus, in the case of football, is the score at the end of the match. So an outcome focus would be encouraged by saying ‘we must win this match, we must beat them, it is must win’. This may sound very familiar in quotes from players and coaches to the media you have heard before, or even your own Sunday League team.
Instead, a mastery focus (sometimes called a task focus) focuses on mastering the task itself. It’s the plan, the ‘how’ to get there. Rather than discussing what ‘there’ is, it’s focussing on walking the path to get there. Which path? How to work?
Considering this as a framework, I want to analyse some of my favourite Ranieri quotes this year, and there are dozens more you could find: He has explicitly stripped away the importance of the result (and thus associated anxieties of something the players have no control over). He has said to his players you can lose (imagine how liberating from stress that must feel!) Instead, he shifts the focus to that of their character, spirit and mentality. This mentality of fighting spirit is a theme that runs throughout. The key is this: they have a lot more control over their spirit, if they choose to fight until the end, than they do over the scoreboard. There are another 11 players in different colour shirts that can affect that.

Here he removes the importance or pressure of the result again – he doesn’t want to think about it! Instead, he clarifies that he is only concerned about the next match. And the next one in this case, fellow contenders Arsenal, isn’t about winning, but enjoying and being in the moment of a tough match, the players and the stadium. 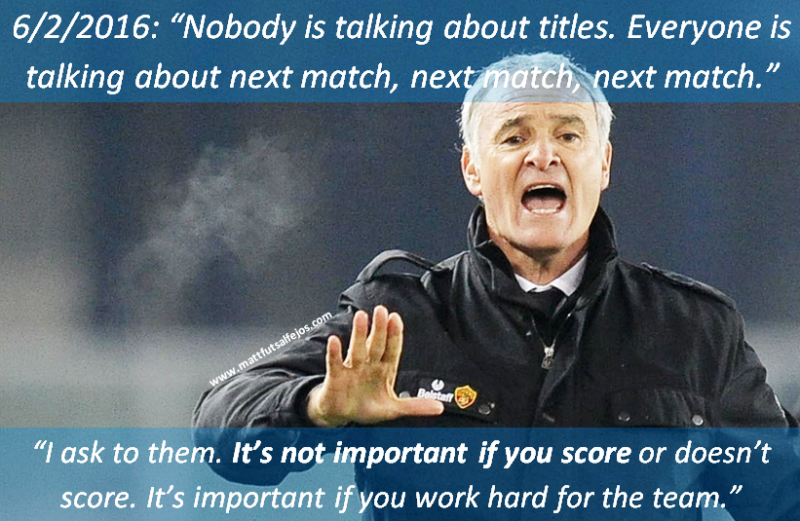 When asked about the players talking about titles this was the response. Again, he’s taken away the end goal, the sign way down the road saying Premier League Champions. He has shifted the focus into which turns and decisions they need to make immediately. He never focusses more than one match ahead, to give total concentration and effort to the only thing they can control – how they approach the next match. Anything else is wasted and can increase anxiety
I ask to them. It’s not important if you score or doesn’t score. It’s important if you work hard for the team.
Scoring a goal is a result, again we don’t have control of this. We can have control, for example of certain runs into the box, of trying to play the ball out wide to deliver crosses, or playing off a target man, but we can’t directly control the result on the scoreboard itself. All he’s asked is that they work hard for the team. Jamie Vardy focussed on that and happened to break Ruud Van Nistlerooy’s long-standing consecutive game scoring record, going eleven games.

March 5. 12:45pm Arsenal vs Spurs. 5:30pm Leicester vs Watford.
There was a big game between two title rivals three hours and forty-five before Leicester kicked off. Claudio emphasises he isn’t concerned or watching other teams’ results. The outcome focus, of something he can’t control, can only increase anxiety. He has even less control over the scoreboard of someone else’s game that his. He instead focusses his energy and time to preparing his team for the challenge ahead. 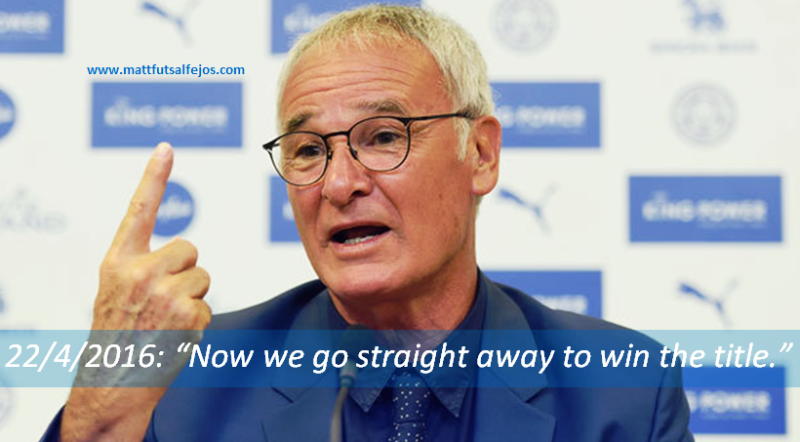 Amazingly, even though the press had been discussing it almost daily for six months, the first mention of winning the title came on April 22, only once Champions League football was confirmed. Leicester were five points ahead with five games to play so had a bit of leeway by this point. Interesting for me, because by the time he mentions the outcome focus, it is all but achieved. Only Liverpool in recent times have lost the league from a similar position.

Before the game on the weekend against Manchester United. The equation was this: win, and you are the Premier League champions. Sounds conducive to an outcome focus doesn’t it? Ranieri again asks for tenacity and work rate, taking away any importance and anxiety of the result.
As you can see, a mastery focus helps performance by reducing anxiety, and increasing focus and attention on the things that will help give the best chance of getting a result. Remember we can control certain choices ourselves, but not the result on the scoreboard – there is another team who will have a big impact too.
So, for a contrast. Spurs vs Chelsea match on Monday that clinched the title for Leicester.
A new record was set. Nine yellow cards for one team is the most in the Premier League era of more than 8,000 games. It may have been that the mastery focus was on a strategy of roughing up the Chelsea players and being physical. It certainly seemed to be the case against the volatile Diego Costa.
But I would guess that a heavy  outcome focus in their pre-match preparations resulted in too much pressure and anxiety.  They forgot about playing football and how they were going to do it! Before the game, Spurs knew they had to win to have a chance at the title – the equation was simple. And the equation was similar to Leicester – win and the title is yours. But by having the talk and the focus on ‘we must win’, the anxiety levels became too much and they quite literally lost control. The manager had to come onto the field at one point to break players up. There was stomping, eye gauging and dangerous tackles. Morals go out the window if winning is everything .
The last game of both Spurs and Leicester perfectly illustrate the difference between an outcome focus and a mastery focus. So even if you want to win, the science shows that the best chance of doing that is to focus on something else – how you are going to win. Controlling the controllables.
It’s no wonder Leicester fans are now naming their children Claudio and parliament has suggested knighting Claudio Ranieri. The man that showed anyone can dream of going somewhere incredible: If you focus on the plan to get there, rather than the somewhere itself.
Two great videos of Ranieri quotes, and a touching message from the fans and how much it meant to him:
Don’t stop dreaming. Be smart like the fox.

Zidane, Benzema and the mess surrounding the No.9 spot

Diego Simeone’s Atletico Madrid may be past their best: how major signings have left them a diminished force